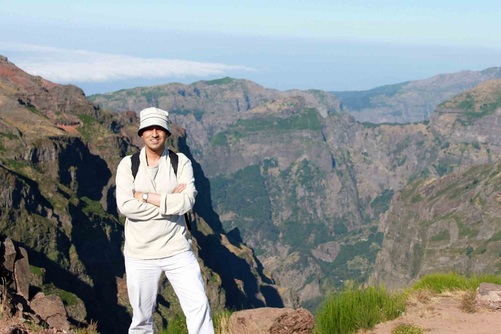 Navjot Singh pictured in Madeira: Photo Copyright Terry Marsh
I am multi-cultured, multi-faceted, British, but a world citizen by vocation.

London, my hometown, is where I started to gain an intense interest in aviation and travelling, and, to some extent, my real adventures of experiencing culture shock began. I grew up as a 'third cultured kid', and because of that I feel very international, even though I have a British upbringing. Having been a keen aviation enthusiast since a very young age, and a world traveller, I have grown accustomed to being an expat. Every kid has a dream job they aspire to achieve, and mine was to fly planes. Due to certain pressures in life I had to give up the ambition of flying aircraft- although I have full knowledge of  the aviation industry and aircraft in general. As they say in Latin, 'age quod agis!'

I am appreciative to have gained my principal education at the renowned Dulwich College - a fine institution of educational excellence situated in South-East London. It was at Dulwich that I also picked up Latin, and a passion for languages and world cultures. I take a great interest in the works of John Amos Comenius. After graduating from Dulwich, I embarked on a very successful GAP "Year In Industry" with the Timken company in Northampton, an industrial town known for its fine English shoes, and Alan Oswald Moore. During my time at Time I earned the 'Young Engineers Award for Britain - East Midlands Region (1999)' as awarded by the UK Engineering Council.

From there life took me to Loughborough University, situated in a town in the midlands known for its fine industry, and the ever great English windy weather (!). There I embarked on a challenging course to study a combined Bachelors and Masters degree in Electronic and Software Engineering ((MEng) Hons) - because I thought this was the technology of the future (and it is), and because I highly value hardcore academic thought. It was during the latter two years of my time at Loughborough that I decided to combine the attractiveness of studying (and now work) with travelling. Among other extra curriculum activities at Loughborough, in 2002 I was also the university representative at the BBC TV University Challenge; a general knowledge competition undertaken by groups of (max) 5 students from each university- though sadly we did not make it past the preliminary round (it's the taking part that counts).

Rather than applying for graduate jobs in the UK, I fled to the fascination of applying directly to multi-nationals in the Far-East, namely Hong Kong as a starting point. There I taught myself spoken Mandarin Chinese (learning Cantonese seemed meaningless), a language in which I am fluent in now. Since that time, a serious thought has occurred to me that travelling is not just some random hobby of mine, but it is, rather weirdly, part of my DNA and my inner self - almost to the extent that my existence to stay in any country for a long time would be highly questionable by the travel gods.

I lived and worked in all of the major Chinese cities (Beijing, Guangzhou, Shanghai and Shenzhen) for over six years before I repatriated back to London in 2007. Since then I have lived in Switzerland for some considerable time, as well as travelling and writing about my experiences. From 2009 till now I have been living in China for another long stint as an expat (Suzhou, Shenzhen, Hangzhou, Guangzhou, and Shanghai), and freelancing. I share my stories and thoughts here. Effectively, I'm a British capitalist, who is a champion of globalisation, and have over 20 years global experience working as a writer, strategic content manager and a journalist. I don’t interact in politics, and my religion is a combined mishmash of writing, aviation and travelling.

More importantly, I'm a journalist, a content manager and also the published author of two niche travel guides to China. The first one is Newcomer’s Handbook to China: Including Beijing Guangzhou, Shanghai and Shenzhen (First Books, 2008, 2012); and the second book is China: Business Travelers Handbook (Stacey International, 2009). Recently I have taken a serious zeal towards Photography, specifically aimed at aviation, people, and culture.